Why would 95% of Patients Recommend Minerva Ablation?

Endometrial ablation is a quick outpatient treatment for heavy bleeding.

Endometrial ablation is the removal or destruction of the lining of the uterus (endometrium). It does not require hospitalization, and most women return to normal activities in a day or two. Ablation is an alternative to hysterectomy for many women with heavy uterine bleeding who wish to avoid major surgery. After a successful endometrial ablation, most women will have little or no menstrual bleeding. Patient selection and physician experience are essential to a good outcome.

How is endometrial ablation done?

What are the methods of endometrial ablations?

Many methods of ablation have been investigated including Microwave ablation, Hydrothermablation, Cryoablation, ThermaChoice balloon, Novasure and now the newest method: Minerva. There are even more devices available in this country and other countries, but I think that the disadvantages outweigh their advantages. 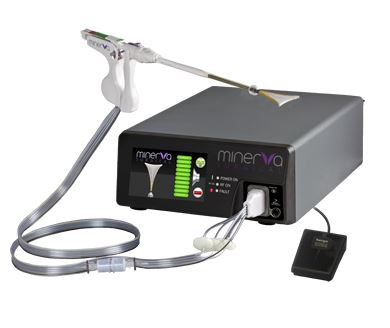 I use the Minerva Endometrial Ablation (above)

What Happens After Treatment?

After treatment, you are taken to a recovery area and watched for about 1 hour to make sure there are no complications — mild or moderate low abdominal cramping is common. You will then be released and someone who is with you may drive you home. You may not drive for 24 hours because of the anesthesia you were given.

Most patients have mild low abdominal pain for a day or two. Over the counter (non-prescription) pain medication is usually more than adequate to achieve reasonable comfort. Patients also report vaginal discharge following the procedure. Immediately after surgery, the discharge is likely to be bloody in color, but it gradually turns clear. The total time vaginal discharge continues is variable but usually lasts for two to four weeks. Please wear some sanitary protection (for example a panty liner) during this time.

Who should consider endometrial ablation?

Women who have menstrual bleeding that is impacting their life, and do not have other problems that require a hysterectomy should consider endometrial ablation.

There are risks to endometrial ablation, which should be compared to the risks of things we do in everyday life. Some of the risks of endometrial ablation procedures are perforation of the uterus, absorbing excess fluid, bleeding, infection, injury to organs within the abdomen and pelvis, and accumulation of blood within the uterus due to scarring. Abnormal bleeding should be evaluated whether or not you have had an ablation.

A small percentage of women having an ablation will still eventually need a hysterectomy, but the great majority will not. Having done endometrial ablations since 1985, I can often identify women who will have a successful ablation and those who would be better off with other treatment.

Who shouldn’t have an endometrial ablation?

Who can help me decide if an endometrial ablation is for me?

It is helpful to see a gynecologist who is familiar with, and who can provide all of the alternatives for the treatment of your problem. A physician who does not do endometrial ablation regularly is unlikely to have the experience to help you make the best decision. The physician should be expert at a vaginal-probe ultrasound and at diagnostic hysteroscopy and should consider non-surgical treatments, as well as discussing the advantages and disadvantages of all the options available. While the physician can provide you with information, the decision is ultimately yours.