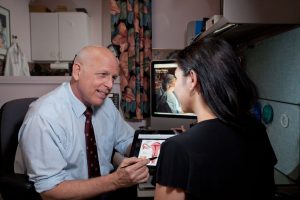 I insist on treating patients as human beings and not numbers, seeing one patient at a time and trying to be honestly helpful.  Our entire staff strives to live out the mission of Art And Science Of Obstetrics and Gynecology PC:
to Treat You With the Best Possible Balance of Compassionate Caring (Art) and Technology (Science)

I have practiced Obstetrics and Gynecology in Virginia Beach,  Virginia since 1984.  After being a solo practitioner for nearly 20 years,  I entered a cross coverage arrangement with Doctors Ted Hughes, Marybeth Dixon, Elizabeth Golpira,  Anna Basso and Kristin Mosier of Womancare Centers in Norfolk, Va.   This arrangement has markedly improved flexibility in patient scheduling and has been very well received by my patients.

I am certain that the best education is an intense and never-ending journey.  As such, I continuously qualify for both the American Medical Association and the ACOG Continuing Medical Education awards and voluntarily re-certify every year through the American Board of Obstetrics and Gynecology.

Ultrasound:   For over a quarter century, I have performed all of my own gynecologic ultrasounds. I have attended over 20 postgraduate courses on Ultrasound in Obstetrics and Gynecology. I personally perform 2D, 3D and/or 4D ultrasound as needed on all of my gynecology patients providing a remarkable advantage in the interpretation of ultrasound information enhancing its integration into decision-making.   We have just purchased a brand new General Electric E8 3D/4D Ultrasound machine.

Electronic Health Records:  I am passionate about technology. In 1998, many years before most practices, I introduced electronic health records into my office. I have spent literally thousands of hours using and developing problem-solving sequences and embedding them into the structure of the electronic health record allowing greater security, stability, e-prescribing and features that enhance the patient’s overall experience.  We are introducing tablet computers for patient check in and will continue the endless ongoing development of real-time decision support in our Electronic Health Records.

Personal:   I am a committed husband, father and grandfather.  I have been with my beautiful wife Cindy since 1973.  She is a successful flame-work glass artist who can usually be seen at the Virginia Beach, Boardwalk Art Show.  My oldest daughter, Jayme, works for Google in Boston, Ma.  My youngest, Melinda, is a practicing Physician Assistant in an Emergency Room outside Columbus, Ohio.   My life revolves around my practice of medicine, my wife and family, personal fitness, acoustic guitar, 2  Bengal cats and our Koi pond.

11/2014 Re-certified  – American Board of Obstetrics and Gynecology 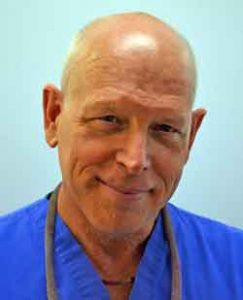