I am happy to provide circumcision up to 4 weeks following birth.  Call our office for further information. 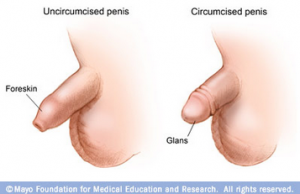 Myths and Lies about Circumcision

MALE CIRCUMCISION is the surgical removal of the foreskin from the penis. The procedure may be done for religious reasons, personal preferences or a belief in health benefits. Circumcision is probably the world’s most widely performed procedure. About one-third of all males worldwide are circumcised.

COMPLICATIONS: 1.5% rate for newborns – Greater when procedure performed by inexperienced operator, in unsterile conditions, or when the child is at an older age.
Bleeding: usually stop with simple pressure – rarely requires sutures.
Infection: between 1 and 100 and 1 and 1000 cases, most treated with antibiotic ointments.
Serious spreading infections: occur in perhaps 1 in 4000 cases.
Removal of either too much or too little foreskin – actually the most common complaint of parents.
Require plastic surgery: 1: 15,000.
Circumcision does not appear to have a negative impact on sexual function.

TECHNIQUE: Devices such as the Gomco and Mogen clamps are commonly used in the USA. The amount of foreskin to be removed is estimated (an imperfect process). The foreskin is separated from the tip of the penis. The circumcision device is placed and finally – the foreskin is removed.

PAIN MANAGEMENT: Unmedicated circumcision causes pain so the use of pain medicine is strongly recommended. First the infant is distracted with a pacifier and sugar water. Then local anesthesia gently injected with an incredibly tiny 30 gauge needle providing a “ring block” – the most effective technique and more effective that EMLA cream. A quicker procedure reduces duration of any pain; therefore use of the Mogen clamp has been found to result in less pain than the use of the Gomco clamp or Plastibell. Some online sources suggest that if the procedure is done “rapidly” then no xylocaine is needed – I respectfully but profoundly disagree. I can easily do the procedure well (with excellent anatomic outcome) in 60-90 seconds – if I ignore the infant’s screaming – I believe this is unacceptable – I stopped doing this over a decade ago. It takes no more than 12-15 minutes to dramatically (a day and night difference) reduce the infant’s discomfort.

SEXUALITY: Circumcision does not appear to decrease the sensitivity of the penis, harm sexual function or reduce sexual satisfaction. The Royal Dutch Medical Association’s 2010 Viewpoint mentions that “complications in the area of sexuality” have been reported. Circumcision opponents emphasize anecdotal testimonials as evidence.

SEXUALLY TRANSMITTED DISEASES: More than 100 studies describe a higher incidence of sexually transmitted disease in uncircumcised men and only one reports the opposite. Of 33 cross-sectional studies looking at circumcision and HIV (AIDS), 27 report that circumcised men are less likely to become HIV infected; the six other studies showed no difference between groups. Three randomized controlled trials were done in South Africa, Kenya and Uganda. All three trials were stopped early by their monitoring boards on ethical grounds, because those in the circumcised group had a lower rate of becoming infected with HIV than the control group.

A CDC STUDY: suggests newborn circumcision would be societally cost-effective in the United States based on circumcision’s efficacy against the heterosexual transmission of HIV alone, without considering any other cost benefits.

The American Academy of Pediatrics (2012) reversed its position and now states benefits of circumcision generally outweigh risks and furthermore recommends that neonatal circumcision in the United States be covered by third-party payers such as Medicaid and insurance.

A Johns Hopkins study (2012) that considered reported benefits of circumcision such as reduced risks from HIV, HPV, HSV-2 and UTIs calculated that if the circumcision rate in the United States were to drop from 55% to 10% (the rate in Europe), it would “increase lifetime health care costs by $407 per male and $43 per female.” The cost of the procedure is more expensive for an older male than a newborn.

URINARY TRACT INFECTIONS: Every study today reports that uncircumcised boys have more urinary tract infections. There are no contrary data. A 1985 study found 20 times more urinary tract infections in uncircumcised infants. Others showed the increased risk is not age dependent; it applies to infants and older boys, and in countries all over the world.

If you need A LOT more information